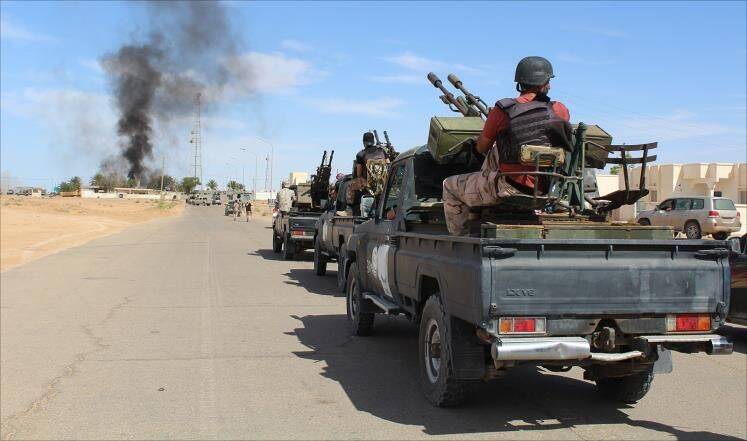 Strategic Council Online – Talking about the field progress of the National Unity Government and the defeats of Khalifa Haftar in Libya, a university professor said it is unlikely that peace will be achieved in Libya in the current situation. He stressed that other agreements should be reached in addition to the Skhirat peace agreement another deal must be forged taking into account the demands of the political groups because if the government of national unity fails to meet the people’s demands we may see extremist groups emerge in the country.

In an interview with the website of the Strategic Council on Foreign Relations, Dr. Ahmad Bakhshi noted that there have been changes in the developments in Libya in recent weeks. He said both the international community and the government of National Unity and the supporters of Khalifa Haftar have reached an unwritten mentality and consensus that changes must take place in order to alter the situation.

Escalation of Conflict between Haftar and Turkey

Referring to Turkish President Erdogan’s remarks that developments indicate that Haftar could be ousted from the Libyan transition process at any time, he added: “For the past one or two months, groups’ consensus on Khalifa Haftar has been declining, and the UAE, Egypt and Saudi Arabia see it unlikely for Haftar to dominate Libya and gain victories. He has lost special international support, and political and social groups that supported him have concluded that he needs to be replaced by due to his failures over the past two years.”

Noting that the National Unity Government had achieved some victories in a month or two and, in cooperation with Turkey and the United Nations, had devised a strategy for successful attacks, Bakhshi referred to a telephone conversations between the US and Turkish presidents about Libya and said: The United Nations and Turkey came to the conclusion that they had to have the upper hand in the developments in order to bring the other side to the negotiating table. Turkey’s support for the National Unity Government, especially in 2020, was increased, putting General Haftar on the defensive. The deployment of the Turkish Armed Forces in Tripoli and Misrata and training of the military forces of the National Unity Government changed the course of the war, and General Haftar was practically defeated in parts of the region.

Noting that Khalifa Haftar has lost part of its territory in the past month or two, the analyst blamed the decline in support from the pro-Khalifa Haftar side, saying the Egyptian foreign minister has said that Egypt is ready to force Khalifa Haftar to accept new developments and peace.

Decline in Oil Interests of UAE, Egypt in Libya

He stressed the importance of the advances made by the national unity forces till the coastal city of Sirte and the important air base in the city and access to its oil resources, adding: “In practice, this is part of General Haftar’s source of income and of course the interests of other countries such as the UAE, Egypt and Saudi Arabia are also at stake.” These developments have led them to seek an immediate ceasefire so that the Haftar forces do not lose more ground.

Bakhshi added: “The parties to the dispute are seeking to force the other side to make peace and talk so that they can organize part of the process of state-building that is taking place under the auspices of the United Nations under the name of National Accord.”

Referring to the effects of regional insecurity and the possibility of its spread to southern European countries and the concerns of Europe, the African affairs expert said: The neo-Ottoman strategies and policies that Turkey pursued during the time of Davutoglu are being adhered to in all of Turkey’s foreign policy today, and the country continues to expand its territory and increase its strategic depth.

Regarding the prospects for stability in Libya, he noted the weaknesses of the National Unity Government, saying: “Unfortunately, this government is in a crisis of inefficiency and part of this crisis may be due to various factors such as foreign intervention, civil war and obstructions of Khalifa Haftar.” On the other hand, it seems that what is called the peace process is only for the purpose of buying time; Because the UAE, Saudi Arabia and Egypt do not accept that there should be a government in Libya with Brotherhood tendencies or advocates. The existence of such a neighbor will make life a hell for other countries.

However, the university professor stressed that the situation in Libya does not indicate restoration of calm and stability, and even if there is calm, it will be short-lived. “The Turkish and Egyptian governments, both of which are somehow supporters of the two opposing sides in Libya have concluded that they can reach an agreement and at least accept the 2015 Agreement in some form. The Libyan government has agreed to accept the deal subject to the terms of the agreement. Khalifa Haftar, following his cooperation and consultations with the three countries, has come to the conclusion that he must accept the status quo.

Lack of Peace Potential under Status Quo in Libya

At the same time, Bakhshi said: “However, this potential does not exist in the current situation, and Libya is facing problems beyond Khalifa Haftar. Basically, during Gaddafi’s time, there was no state-building in the country, and the fragmentation and nomadic structure, the weapons in the hands of the people and the different regional demands and the interventions of the countries in the region do not provide a good perspective for Libya; So as for Libya, we have to wait for certain developments; Unless, of course, some developments take place in favor of the formation of a national government.

Emphasizing that besides the Skhirat peace accord it appears other agreements should be signed which also take into account the demands of political groups, the university professor stressed that some see the former deal as a factor for destruction of the state. “The process we are witnessing in post-Gaddafi Libya with this peace treaty is almost tantamount to reconstruction of the scenario that took place after the Soviet withdrawal from Afghanistan with the involvement of the Mujahedin. They sometimes signed agreements and worked together for a while, but they fought again. In the process of this anarchy another group may emerge.”

“If the National Unity Government fails to meet the demands of the people, we may see extremist groups emerge,” Bakhshi said, referring to ISIS activities in North Africa and al-Qaeda in the region. The outlook for Libya at present is not good unless the countries with proxies in Libya reach agreement to take some effective steps to save the country otherwise, we may suffer from extremism and chaos in Libya.