» Not needed » Europe’s Limited Chance to Prevent Death of JCPOA

Strategic Council Online: President of the Strategic Council on Foreign Relations, Dr Kamal Kharrazi, referring to Iran’s decision on partial suspension of its JCPOA commitments during 60 days said: “It’s a good opportunity for Europe to compensate for its past procrastination by accelerating the implementation of INSTEX and prevent the death of the JCPOA.”

Dr Kharrazi who was in France to attend Leaders for Peace Forum met with the chair of Committee on Foreign Affairs at French National Assembly Marielle de Sarnez.

Ms. de Sarnez, welcoming the visit and emphasizing the importance of Iran, asked for more details about recent Iran’s decision to suspend the implementation of parts of its JCPOA commitments.

She said that this decision and Iran’s withdrawal from the JCPOA would undermine the positive results and the stability created after the Iran Nuclear Deal, which is a matter of concern.

Dr Kharrazi explaining the position of the Islamic Republic of Iran, said: “The Iranian people are very suspicious about Europe because of its failure to fulfil its JCPOA commitments and its compliance with Trump’s sanctions policies and submission to the transnational decisions of the United States.”

He added: “The Islamic Republic of Iran entered into the negotiations with honesty, which resulted in a nuclear agreement endorsed by the UN Security Council. But despite Iran’s fulfilment of its commitments, Europe only sufficed to take political positions in supporting the deal, and failed to fulfil its obligations.”

The SCFR president added: “As a result, the Islamic Republic of Iran, on the basis of the provisions of the JCPOA has decided to suspend parts of its obligations.

Dr Kharrazi said that the 60 days is an opportunity for Europe to compensate its past delays by accelerating the implementation of the INSTEX and facilitate the trade and financial exchanges between the two sides in order to prevent the death of the JCPOA.

The chair of the Foreign Affairs Committee of the French National Assembly regretting Washington’s transnational decisions and pressures on Europe and criticizing the US pullout from the JCPOA admitted that the nuclear deal has failed to move forward in good terms.

She stated: “Europe and France are committed with good intentions to pursue and maintain the JCPOA and we hope to find an appropriate solution.”

De Sarnez also emphasized the importance of exchanging parliamentary delegations between the two countries for a better understanding of the realities and views of the two sides.

Consequences of US Action Against IRGC, Contrary to International Law 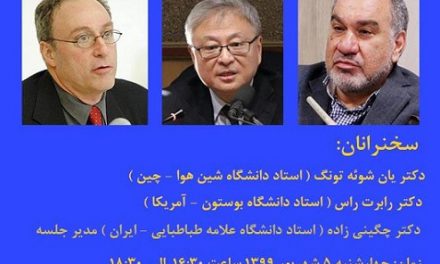 SCFR holds Webinar on “China and the Future of International System”

Iran Will Have to Respond Appropriately to JCPOA Disloyalty