» Required » Iran stable due to its democracy: Kharazi

TEHRAN, Feb. 05 –Kamal Kharrazi, head of Iran’s Strategic Council on Foreign Relations, said Saturday that Iran’s stability is based on its democracy.

“Because of this popular might, Iran has become a regional power, and as a stable and democratic country, cannot be indifferent to the regional developments,” said Kharazi, addressing a gathering of Asian and African envoys to Iran.

He further hailed Iran’s security, saying the foreign diplomats living in Iran have the privilege to watch the region very closely, without facing threats and dangers.

“Despite being in a region filled with chaos and conflict, this watchtower (Iran), as a democracy, has [enough] security,” he underlined.

He also said one of the pillars of Iran’s foreign policy is helping regional countries in fighting terrorism, making a reference to the Islamic Republic’s role in Iraq and Syria.

“We helped the Iraqi and Syrian governments because they asked for our help,” he said, adding that Iran’s help has led to great victories and achievements for the Syrian and Iraqi nations.

Iran’s conduct is very different from the policies of certain countries that have given birth to the terrorist groups in the region, Kharazi noted.

Kharrazi: US cannot be trusted 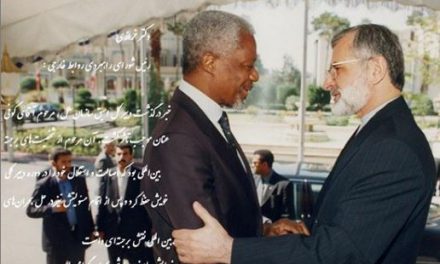