» Required » Iran Will Have to Respond Appropriately to JCPOA Disloyalty

Iran Will Have to Respond Appropriately to JCPOA Disloyalty

Strategic Council Online: President of the Strategic Council on Foreign Relations says the Joint Comprehensive Plan of Action (also known as Iran Nuclear Deal) has, unfortunately, had no benefit for Iran so far. However, Dr. Kamal Kharrazi noted, Iran is in a situation where it has to respond to the disloyalty of others.

SCFR President, currently on a visit to Moscow, met with the Chairman of the Foreign Affairs Committee of the Federation Council (Upper House of the Russian Parliament) Konstantin Kosachev.

He hailed Iran’s important regional and international role, noting that many regional and global issues cannot be resolved without the presence of Iran.

Dr. Kharrazi, referring to the US sanctions, said: “Russia is a member of the JCPOA and has been working to maintain it; According to IAEA reports, Iran has so far complied with its obligations, but unfortunately, so far, the JCPOA has had no benefit for Iran because the United States has violated the deal and pulled out of it. The Europeans also have not fulfilled their obligations, so Iran’s tolerance is limited and it is in a situation where it has to respond appropriately to the disloyalty of others.”

Dr. Kharrazi also pointed to the issues of the region, and in particular, Syria, saying that Iran and Russia have played an important role in the stability of Syria and their presence in the country is legitimate. Of course, with the return of sovereignty of Syria, it is necessary for the foreign forces present in the country unlawfully to leave and the Syrian constitution to be amended to further engage the people in determining the future of their country. 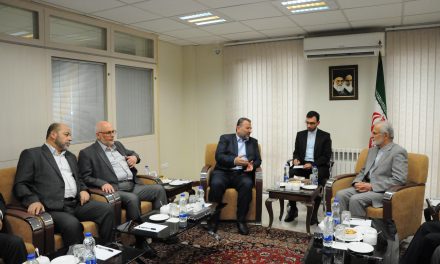